Another thing that have been bugging me since day one was the poor way to mount the lids on the sidebags.

In the beginning the lid came off when unlocked, in the front it was just a tab that went in to a hole
and this was a bad idea from the beginning so after 30yrs of rattle it had become even worse.
So I saved the hinges from the Tourpack before I threw it in the bin.
With some tweaks the hinges was mounted and I had a fairly solid solution with a hinge in the front of the bag.
Next step is some of solution for it to stay open when unlocked, but more about that later. 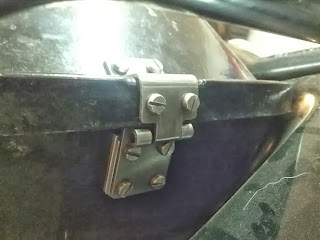