The first season (a very short)

Late summer of 2007 I was finally a Shovelhead owner, and best of all, it was sitting in an awesome bike.
The rest of that year I just rode the beast just to get the real bagger feeling.
I also did a dyno run just to se the status of the mighty Shovelhead. 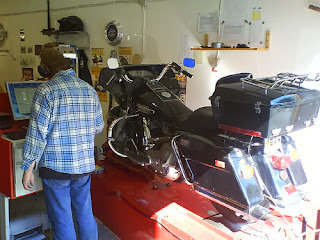 Despite the quite shaggy state of the bike I was hooked at once, both with the smooth ride and the unusual looks.

When the winter came my first wrenching with the FLT begun.
At first it looked like it was pretty much untouched but the more I wrenched it I realized the previous owners had done a lot of bad DIY work over the years. Some of the worst example was the switch of many nuts and bolts to metric ones. Oh, my good Mr Davidson and Mr Harley had cried in their graves if they knew.
When i bought the bike i got papers that told that the engine was totally rebuilt from the cylinders and up just two years earlier (2005) which sounded great, but more about that nightmare later...