Even I struck gold sometimes it seems.
Had been looking for Öhlins rear shocks since I bought the bike.
I realized that new Öhlins shocks was out of the question, the price tag was way out of my league.
So old cheap ones that I could rebuild to my specs was my target.
But suddenly one day when I did my daily bargain hunt on the net for parts I struck gold.
A pair of Öhlins from a FXR appeared on the screen and with an awesome price.
A quick call and I have got me a set of my dream shocks.
The FXR has basicly the same frame as the FLT, so the mounting was Childs play.
A quick cleanup was the only thing I had to do before I could mount them with the old hardware. 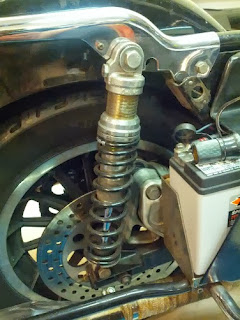