Suddenly the bike was running good just on the front cylinder but poor on the rear when I felt strong enough to try a ride after my stroke.
Step 1A was initiated. Plugs, oil, fuel and pushrod adjustment but it ran still poor on rear cylinder.
Next step was compression test. Not so awesome result, but not bad either.
The action after that was a leakdown test. This time it sounded like it leaked out in the carb.
Aha, something with the intake valve. Rear head went off and so was the intake valve assembly.
Nothing strange here except a small mark in the rocker cover. Could it be the valve spring collar that hooked up against the rocker cover when running and not closing properly? Some light grinding in the rocker cover to get some clearance there followed by thorough cleaning.
Together with the head and new gaskets on to the bike. Time to push the button and darkness spread in my life. Same thing again. So new leakdown, this time it leaked into the exhaust.
Ok, just to start the disassembly again. This time we saw a fraction of a mark in the exhaust side of the rocker cover also.
Grinding a little for better clearance on that side also and thorough cleaning again. But than when we took apart the exhaust valve assembly it all got clear.
When the exhaust valve slided out the valve seat came with it.
A valve seat should NOT come out by itself. Period ! But this did. 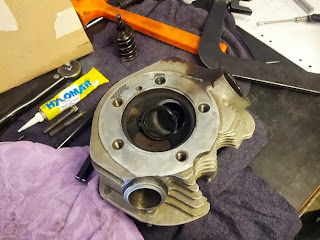 No time to waste so back to work again.
A new seat was purchased and milled to size and a appropriate hole for it was made with the Mira valve seat cutter in the head by Potato speedshop.
Me and Mr Potato walked the extra mile one night and soon I had a healthy rear head in my possession to mount on the mighty Shovelhead again back in the mancave.
Rest of the job was kind of routine by now so putting it all together was easy, but timeconsuming.
This time when I pushed the button it sounded like a mighty Shovelhead should.
And so my season could begin in september, but still....
Autum in Sweden 2013 was supernice and I got a little over a month of riding before the rain came for real.
This thing to get some rides was not just a nice thing generally it really boosted my moral and recovery from my stroke and made me a happier man. 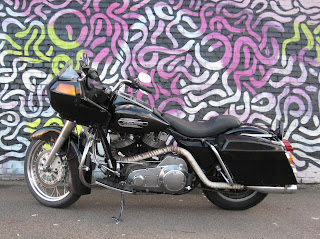 And finally the mean bagger got it's health back and could roar for a while even 2013
Upplagd av Jonas kl. 09:08