Late September 2008 the work begun to lift out the now quite tired AMF power plant for further care at the Potato speed shop.

Mr Potato is a known Shovelhead friend who not only wrenches the beast, he also races the Shovel on the 1/4 mile distance. 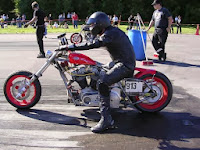 Disassembly was not a happy experience, even though the engine had an overhaul autumn 2005 according to the documentation I got when I bought it. The heads was totally crap and the piston rings were wrong. Only one valve seat was ok, the others were a mess.
Two valves were bent and the rear exhaust valve guide fell out by itself !!!!
But with some appropriate help a new custom valve guide was fabricated and a new big guide hole was milled out so we later could press it in to the head. Only thing that had an ok status was the cylinders and pistons so we kept them.
Even the crank pin rollers had factory specs after 60000km/37000miles so we just replaced the cage. 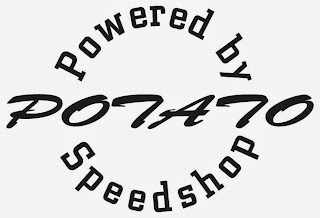 And of course all bearings, gaskets and other worn out stuff was replaced.
The heads got glass blasted for a shiny look and the cylinders a nice coat of black paint.

To top it of, the OEM mufflers was replaced by dual Supertrapp slip ons but more about carb and muffler later. 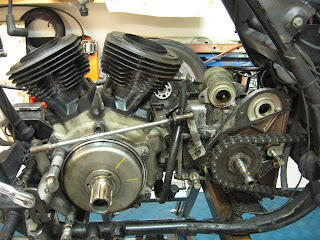 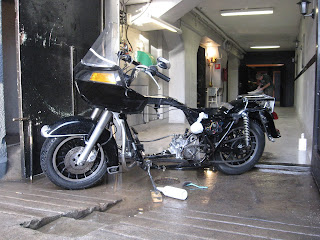 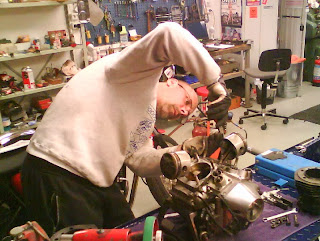 Mr Potato himself with his magic Shovelhands starting the renewal 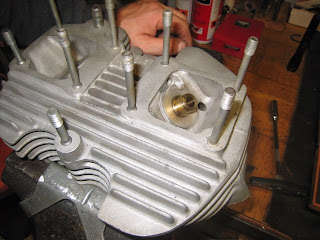 New customvalveguide in it's new home 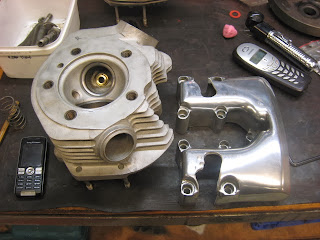 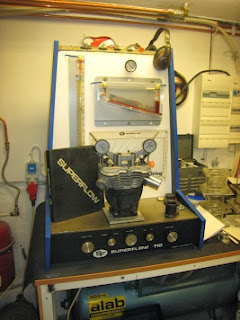 After I made the porting we gave the head a run in the flow bench. 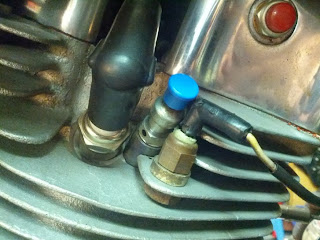 When the heads was overhauled we also mounted a set of compression rear head.
A friend helped me to machine a hole for the release valve.

We also did an extension for better reach.
It is a tight fit between the sparkplug and the release valve
The other gizmo with the cable is the "cylinder head temperature sensor".
This was apparently original equipment on the old FLT's. 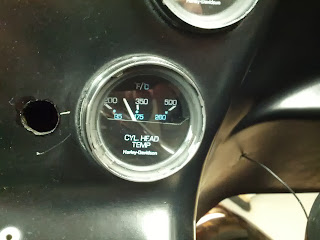 The sensor on the rear head is paired with this gauge in the fairing.
(What the hole next to it is for is a enigma and it's not pretty either.)


Than I did a dynorun again to compare before and after the overhaul. 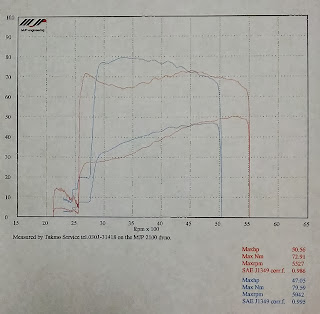 Red -> before overhaul vs Blue -> after the overhaul
Not so much difference but nice even curves after.