Both weather and the mancold I got in the beginning of the summer vacation tried to stop me and the Speedster to get to know each other.
But we overcame that and got some fun time together anyway.
The Speedster is a really fun roadfriend I must say.
It revs like hell and moves, even on twisty roads which surprised me.
A rigid end ain't the optimal chassie solution for handling, especially paired with OEM Harley forks and brakes.
But apparently the bike doesn't know all that and handles quite OK anyway.
Up until today 16/9 I've run 1587km about 1000 miles.


#Gearing
It revs like a beast in "highwayspeed" so a front sprocket change was necessary.
Also the already worn out mock-up chain was replaced with a new one.

#Nuts n' Bolts
All nuts and bolts was gone through.
But nothing had moved so I was OK.

#Oilchange
Don't know what the engine went through before entering Bombus Speedshop so the goal was a quick rinse inside with fluids, both engine and trans.
But time went on it both sounds well and runs ever better so that will wait until spring.

#Throttle
The throttle is more than peppy I must say.
The short travel of the "quick throttle" makes driving harder then necessary.
So a re-construction from peppy as F¤#K to just way to peppy was made but more about that later.

#Dynorun
Just for fun I went to my friend Thomas at Tekmo Service for a reality check.
It runs surprisingly good so I was curious about the real numbers.
A healthy 65.52 hp and 100.44Nm on the rear wheel was the verdict.
Way better than I thought. 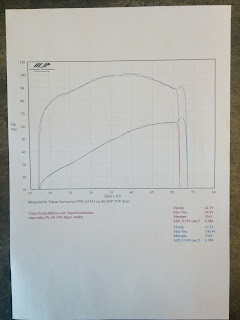 I've realized that I'm the total opposite on most things, even with this build.
The goal for most stock bike owners is to get their stock bikes look custom.
But I want my custom bike to be as stock as possible but still a custom.
The convenience with a stock bike is so appealing. The flawless functionality is really missed when riding on a customized bike.
Therefore I have realized that the best combo, for me is to have my full custom build but at the same time the OEM functionality, at least so much it's possible.
Upplagd av Jonas kl. 23:38