A month have passed by and even if the weather have been quite mediocre here I've got some experiences of the bike.
Have also made small updates already and it have been a few minor mishaps but more about that later on.

But some reflections so far. 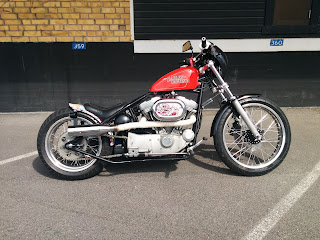 # Riding position
It's actually not so bad.
Much bigger bike to drive than what it looks like.
But some inches back for the hands and some inches forward for the feet would be ideal.

#Engine
It's just a 1200 converted 883 so it ain't no rocketship but the power to weight ratio is waaaaay better than I've experienced before so it goes like hell in my opinion.

#Comfort
I had no experience of rigid frame before this.
Maybe the most surprising thing was how "normal" it feels to drive.
One judgement on the final tech inspection was that it felt like a stock bike.
A good remark in my book.
BUT when it's bumpy it's HELL for the back, and city driving is very bumpy.
But overall it's over my expectations.

I think this one is a keeper and will be a good companion both on the roads and wrenchin' in the winters years to come.
Upplagd av Jonas kl. 21:25