Driving the Mini-Z is as much fun that I've hoped.
But the lack of adjustment on the OEM transmitter  became really apparent, so a another was located.Found a Kyosho branded KO EX-5 on ebay in the UK for a fair price.It felt brand new when I opened the box so i'm more than satisfied.A whole lot of stuff to learn though.All settings on my old Multiplex  EX-9 was analog, this is all digital on a display.Quite steep learning curve but the guys at the track are super helpful.The most important setting for me was the exponential steering and when I found that the car acted more liked I was used to.The backside was how apparent it became how bad im at piloting a RC car.So with a great car and radio, the excuses are over and it's up to me.:) 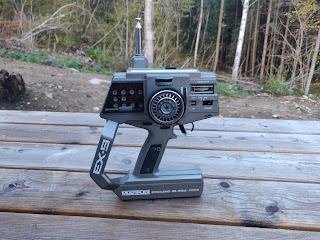 My dear, dear, now obsolete EX-9 that have been my trusty friend since the nineties. 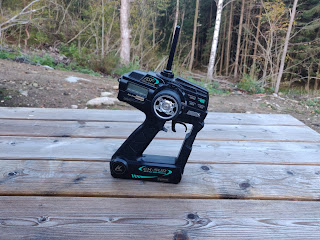