My shop ain’t suitable for vehicles with more than two wheels...I though.
Never really sought after an ATV or Quad like almost all living men does.
But when such opportunity appears I´m not worse than I can change.
Got a text message with a small pic of a orange Quad from a friend with the text.
"You can have it...if you get it NOW, otherwise it goes in the bin".
An offer like that is always appealing.
Both questionable status and free, what else is there to have.
Short while after I rolled up in front of his garage, we put in the now beloved irreplaceable Berlingo and home I went.
It turned out to be a RWD 250cc Chinese Quad that have been sitting outside for a while and now he had come to an end with it.

Took a quick Visual inspection at home of the state and it resulted in:
# OEM china (plastic?) tyres with lots of cracks and puncture
# No battery
# Broken brake lever
# Cracked fenders
# Lots of rust and oxidation
# Lots...and lots of little things neding overhaul.
A lap with WD40 on all things that looked needy for that and I rolled it away for a rainy day.
Or at least when the shop is enough up and running.

But what on earth should I have it for?
Mainly just because, not a bad reason really.
But except from getting the mail with it I´m hoping to have it for plow some newly fallen snow and maybe drag some "trees" now and then.
There is no registration on it so it will never be street driven, just around my vast, vast property. #irony 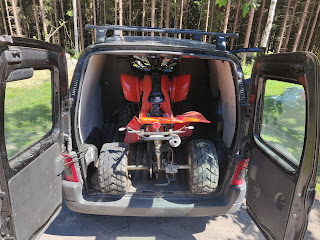 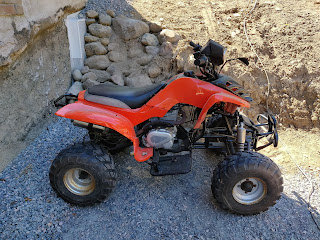 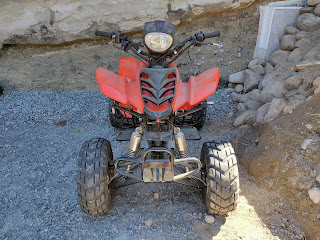 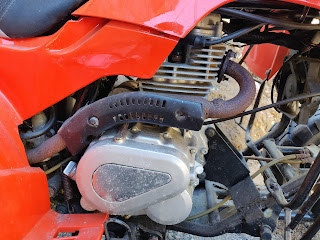 And the ever more mighty 250cc powerplant