Living downtown in a flat doesn't make car owning an easy task
and two cars doesn't make it more easy.
But with the upcoming move to our newly bought house and the non motorcycle season
quickly approaching the need for a second car became apparent.
I managed with the almost impossible task to get a second parking space in our
building's multi-storey car park. So suddenly the hunt for a candidate was full on.
I've wanted a small panel van for a while so finally I got to live out that dream.
But I had some requirements, black, petrol engine and glass in the rear doors.
Not a easy task in a world that almost just contains white, diesel ones.

But I found my little gem about 4 hours drive away.
A black, petrol with glass rear doors, Citroën Berlingo a.k.a. Bombus Beater with both
reasonable state, milage and price.
A little beat and some DIY, but nothing I can't handle myself or with help of friends.
Gonna be the perfect companion for both simple A->B drives, commuting and all the future,
often rough, transportations associated with the new house. 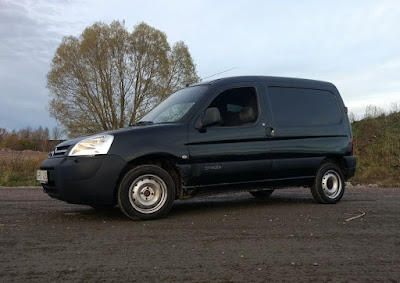 The black beauty that gonna offer both smiles and gray hairs years to come.