Had an idea for the taillight in my head for many years.
To use one of my old pistons that classifies as a sacrifice to the gods of speed.
Don't remember which mishap this is from.
Can be from my breakdown in Germany when visiting the friends in Zündapp Zweitakt-Team Probstei or in the deep woods of Dalsland here in Sweden.

On the German breakdown I was rescued by the whole gang. I was their guest, so I could just watched them replaced my cylinder and piston for great used set that I bought for a real bargain price from them.

On the Dalsland endeavor I was rescued by my dear friend Jacob R.I.P. who picked me up in his Chevy Impala and gave me a case of beer to calm down before we got a van to save the broken hero from the ditch in the forrest and to a safe garage.
That time I waited until I came home to fix the remains.
Instead that weekend I rode the crash van with my friend Bert helping other Zündapp brothers in need.

Which occasion this piston is from will probably never have an answered.
But anyway, both breakdowns shoved real friendship on on a high and real heartwarming level. 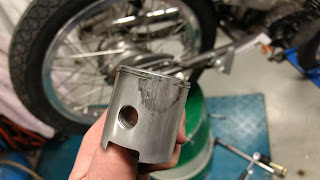 But a nasty breakdown it was for sure 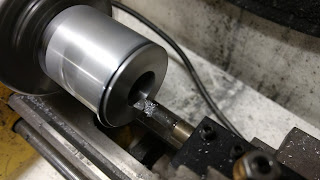 First up, make a hole with my lathe.

Next up mount and test the rear LED light assembly.
My Zündapp is a 1967 so here in Sweden the requirement is just rear light, no stoplight needed. 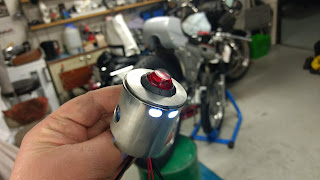 The final touch is the license plate lights in the boost ports.


I put two white LED's in the boost ports and suddenly I had not just a legal rear light, I also had a super cool one of a kind one with some personal history.

Next up is to build a bracket for the licenceplate and rear light.
Its gonna be a sidemounted unit.
First reason for this: There is no space for it up on the cuts.
Second reason: It looks so much cooler with sidemounted licenceplate.

But more about that later...