Next thing to do was the not so simple but quite fun task was to build the electrical system.
As usual I was a bit overambitious and ordered 10m each of 12 colors.
That's a total of about 120m/400ft. 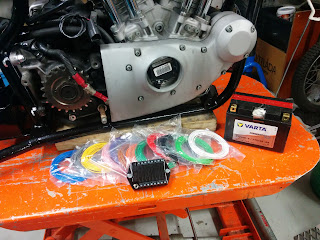 Ready for some serious work with M-unit, 120m/400ft of cable and the new battery.

Yep, that's a lot of wire for a motorcycle electrical system, especially when using a Motogadget M-unit. But I wanted to be set if the EFI conversion starts up in the future.
That's gonna require a bit more wire to get that wired up.

The task begun and lasted waaaaaaaay longer then I thought and desired.
My main hurdle was that I really wanted to learn the task ahead of me.
Also do a nice looking, reliable and functional electric system was high on the priority list.
The system is a mix of various components like OEM Sportster gauges, Buell handlebar control, motogadget M-unit and other good stuff.
Quality automotive crimps and connectors was also key ingredients.
Using the OEM gauges was initially because I wanted a reliable setup but also to make it easy. 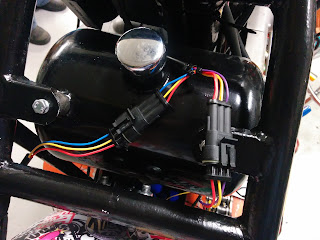 Rear lights connectors under the seat.

Little did I now how wrong I was about the effort to make a electrical system from scratch but now it's finished and works great.

The Motogadget M-unit I put up behind the fly screen, probably the only place with some kind of weather protection on this bike.

The Motogadget M-unit, the magic box that handles all electrical functions.

The other upside of mounting it there is the ease of access, just three screws to detach the fly screen and there it is.
No creeping on the ground to reach the unit and it's connections.

To bad the electrical system is about the last thing you do on a build.
It's actually really fun part of the project but in the end of a project the energy is so drained so even the small stuff left is a mental test, especially a complete electrical system.
In that stage you (I) is so sick of the project and just want it done and not start such a big part of the build.

The Motogadget M-unit itself is such a amazing gizmo and can't be underestimated.
And another thing really helpful thing is Revival Cycles on the other side of the pond.
Their Tech talk are probably Youtubes best guides to motorcycle electrics in general and Motogadgets products in particular.
I highly recommend a visit to both their site and Youtube channel !
Revival Cycles Website: https://revivalcycles.com
Revival Cycles Youtube channel:https: //www.youtube.com/user/RevivalCyclesATX

The odd position for my M-unit is actually a direct inspiration from Revival Cycles.
They have on their "Hardley" bike walked a extra mile for their choice of position, waaaaay more ambitious than mine but still I used an odd position.
Upplagd av Jonas kl. 10:08