Final assembly of the complete handlebar is something else than just put all the parts on for a mock-up.
The throttle assembly for example needed some TLC to work as desired.
And a throttle cable also had to be "made".
The only bolt on part was the clutch cable.
It was the clutch cable that made the decision to use Buell controls from the beginning.
The old Buells with Sportster engine have the right length and the right ends. My goal is to use OEM parts when it's possible.
So assemble the clutch cable was a quick job. Just route it nice and safe, secure it with some clamps on the way and mount the ends, done.

The throttle assembly I use is a old classic here in Sweden, made in Sweden.
A "quickthrottle, for peppy starts" as the old ads said.
A motocross and speedway assembly but also often used by youngsters on their mopeds.
But of course it needed some TLC to fit the Bombus specification.
Had to make a new thread to match the existing thread on the throttle cable.
I also made a cut in the housing so the throttle wire could be more easy to assemble.
Also the housing and the throttle tube itself got some griding and polishing inside to make the movement as smooth as possible. 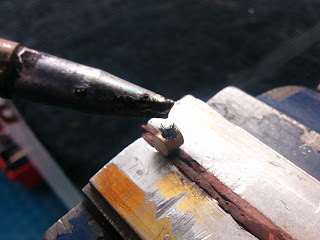 Cut it to apropriate length, put on a brass nipple and some solder 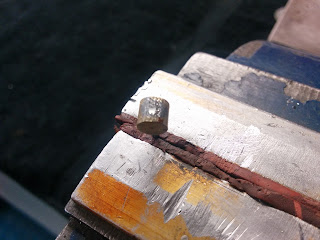 Some heat and grinding later it looks like a OEM part.
At least Bombus OEM. *Hehe* 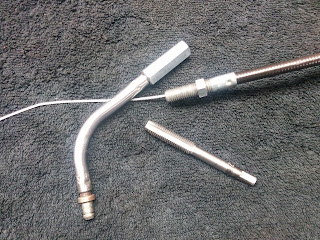 The old dismantled OEM HD throttle cable.
The adjuster/bend will not be used 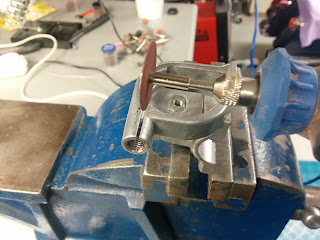 A cut along the threads to more easy mount the wire. 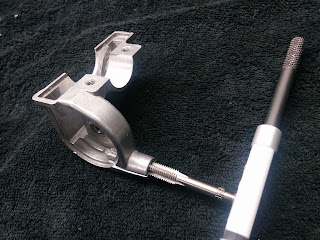 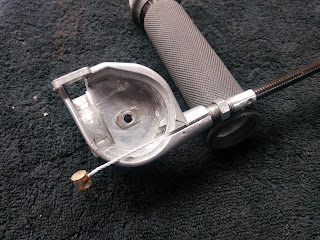 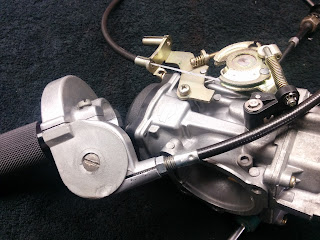 The final build.
After some adjustments I got the throttle assembly smooth and without binding.
The throttle travel is very short so i definitely will have a peppy throttle response.