Hard to do temporary stuff when it still have to look reasonable and have a good function.
The rear fender is one of those things right now,
I don't trust it much to rescue me from the hard and unfair amounts of rain that often decorates the roads here in Sweden.
So for now I went for the tiny fender I had.
First some bondo and sanding to make it at least OK before I showered some layers with black paint over it.
Next step was new to me, vinyl wrapping.
I bought a "sticker bomb" vinyl sheet at eBay for this purpose.
Slow and with determination I started with the task.
WOW, what a shitty vinyl wrap that was.
I'm no stranger to crappy Chinese stuff from eBay, but this was really another level of crap.
I went for it anyway and after a while I had a sticker bomb fender that actually looks OK.
Or as a wise man stated: "Good looking from far, but far from good looking"
Caught by the moment I continued with the air cleaner insert, and that turned out really god as well. 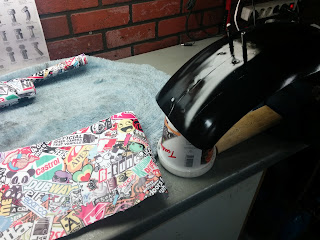 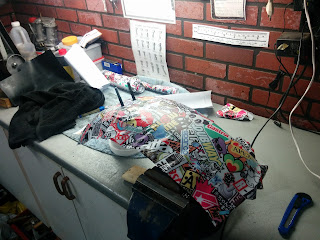 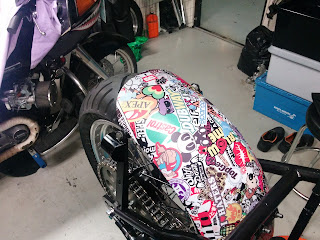 And the result. From a distance it actually looks really good.
Most of the fender will be covered by the seat anyway.