So the day came that i didn't believed existed, when the frame was "done".
I rigged it up, cleaned it and started to lay some primer on it.
Two thin layers. First I thought I could use this color the first year but I think I have to paint it in some darker color, black?
This is just a temporary paint I will use the first year(s) until I feel the bike is ready for real then it's time for its final paint, probably black powdercoat.
It's not even allowed to paint the frame before tech inspection one, but protective primer is OK.
Tech inspection one is just around the corner so I will probably pull it apart again after that to paint it.
Not so labor intensive but still some work.
I might regret it later if I go for just the light primer. 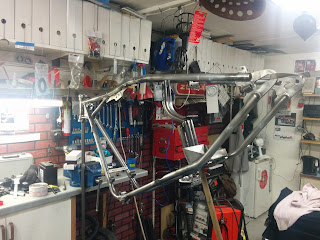 Rigged up, completely cleaned with acetone and ready for layer one. 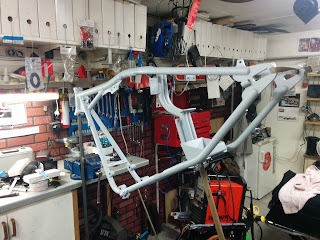