In Sweden where this fairytale takes place it is possible to make your own vehicle from the ground up.
A unique possibility that not many countries offer.
This is possible because a massive work done in the eighties by a team of people that later became known as SFRO - Sveriges Fordonsbyggares Riksorganisation
(Translated to English its something like SVNA - Swedish Vehiclebuilders National Association.)
This is an organization with part time voluntary tech inspectors around the country.
There is also a book available from SFRO with many tips and tricks to succeed with your build. 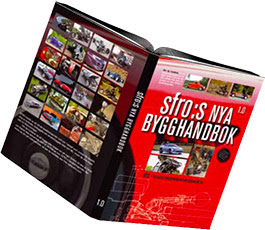 
This opportunity to become a vehicle builder have many used over the years and so will I.
The process have three steps.
One: The build inspection by SFRO.
The first one that should occur some way in to the project.
The vehicle shall have basic construction ready to check things like steering, rake, trail, suspension travel, measurements, material quality and of course welds.
At this stage no paint is allowed but protective primer is OK.
It is also at this step the vehicle starts to exist and the vehicle will have it's VIN number.
The 17 digit long VIN number is partly free to choose by the builder, the 8 last digits is up to the builder to choose.
At this stage its also time to name the build, this is also up to the builder to choose.
My bikes name became "Bombus Speedster"
Two: The second and last inspection by SFRO.
At this stage the build is all ready and things like lights, markings and positions, how it handle's when driving are tested and finally the sound level certification.
The sound level is just 84dB and is quite hard to reach but with some serious mufflers will most often do the trick.
Three: registration inspection.
This stage is done by the national tech inspection and is basically a light version of previous step.
This is also when the vehicle gets its registration number.

And after passing these three steps you have built your own vehicle.

It's possible to make quite amazing builds this way.
The main vehicles made this way is custom motorcycles (HD based), Hot Rods and Cobra/Super 7 replicas but pretty much anything is possible to build this way.

For example, I have a friend that bought a Porsche Boxter and a hacksaw. Sawed the body of the Porsche and welded on a VW Beetle body instead and that is now road legal and counts as a new vehicle, The Bubster.
You can follow his build thread here at the site REJSA (In Swedish)


Here in a early stage starting up in the garage.
Upplagd av Jonas kl. 10:09