So the weekend came again and then it was business as usual in the speedshop.
One of the things I fiddled with this weekend was to get the rear wheel spacing just right.
Not so easy as it sounds. Not just the spacers for the hub will have attention but also the sprocket and brakedisc spacing.
My friend Viking Cycles had a spare rear hub I could use to ease up the work.
And he also arrived when it was time to measure up the alignment of the sprocket.
With a long ruler and many hard words to each other we finally came to a verdict.
*Hehe*
Also the brakedisc spacing issue was later solved.
Now some final spacers for the sprocket and a touch with the lathe on the brake side spacer will do the trick.
My dog Kurt supervised today's work in the speedshop as usual. 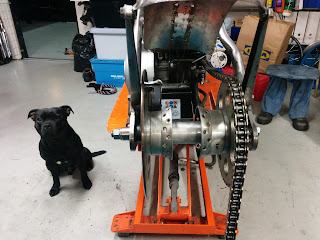