Finally I decided for real that the old primary assembly had to go.
This is something I have wanted since day one but now it happend.
The FLT trans had the "clever" lubrication system that should just drip at the chain or whatever the reason was.
Probably this was replaced with the trusty "oil-in-trans" system by the first service interval.
But the FLT trans wasn't made to hold oil in so leaking begun and have continued since then.

A complete BDL kit was ordered and the old stuff was removed and a cleanup begun.
Not only the primary parts was to be replaced but also the charging system.
When I sent for the belt kit I also went for a complete Accel 32A charging system.
It wasn't really something wrong with any of the old chain/clutch/charging but after 33 years it was time for a upgrade.

The tear down begun with full determination so the primary should be empty and ready for the new novelty parts. 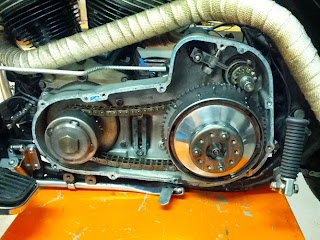 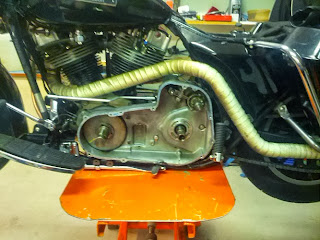 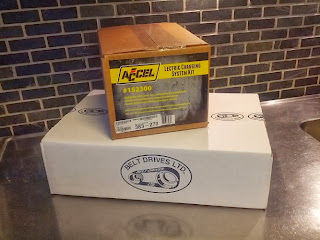 And the novelty parts arrived 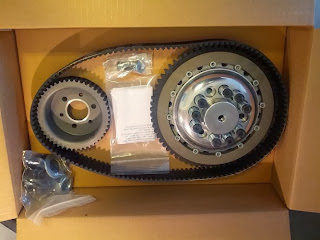 The belt kit looked magnificent in it's box

Down to the mancave with all the shiny parts and than the problem started.